WHAT'S THIS BLOG ALL ABOUT? B-Positive So You Don't Create A-Negative... 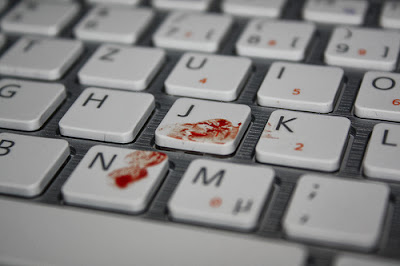 Hello! And welcome to my blog, Splatter Chatter Movie Reviews, the site where gore aficionados can go to read about the most visually disturbing films ever made and NOT FEEL BAD ABOUT IT! Because let's face it gang, to your friends and family you're kind of sick.

But don't worry. You're okay here.

Many people don't understand this fascination of ours with celluloid suffering. "How can you watch that crap?" they ask. "What the heck is wrong with you?" they wonder. "Why is all that brain matter dripping down your butcher's apron?" they scream.

They just don't get it.

Because it's a challenge!

Can you watch all of Hostel without burying your head in the couch cushions? Can you make it all the way through Martyrs with dry eyes and dry pants? How many times can you put Ichi the Killer into the Blu Ray player before it causes permanent damage to your cerebral cortex? (By the way, the answer is twelve.)

What most critics of the genre derogatorily called "torture porn" don't seem to understand is that the average fan of these types of films is not sadistic. We know the violence is fake. In fact, some of the fun in watching these movies is in trying to figure out how certain scenes were made to look so realistic. (The fire extinguisher scene in Irreversible is a good example of something that continues to baffle me.) And we know the people on the screen are just actors who, after wiping off all the corn syrup and cement glue from their faces, probably went out for drinks and burgers afterward. (I can also tell you they are some of the nicest people you will ever meet. Horror conventions are a blast.)

On this site, I will review films that have, or soon will have, a reputation for being extremely violent and difficult to watch. Some will be horror movies. Some will be thrillers. It really doesn't matter to me as long as they deliver the goods. The ratings are based on a five "pint" system, as seen here:

A one pint film is awful and not worthy of your valuable movie-watching time. Two pints is an okay movie with a "must see" moment or two. Three pints is a fine film with a good story but is otherwise non-memorable. Four pints is a winner in all phases of the film-making process and a guaranteed good time for fans of the genre. And the coveted five pint film is one that is not only outstanding in and of itself, but is also worthy of multiple viewings and a spot in the upper echelon of graphic horror.

I do not claim to be an expert on movies. I am not paid for my reviews. I am just a fan with a love of these types of films and the desire to share that love with total strangers who could care less if I die.

As long as it's bloody and filmed in graphic detail.


Back to Home Page