SLAUGHTERED VOMIT DOLLS... Because Who Doesn't Enjoy Watching Someone Else Puke? 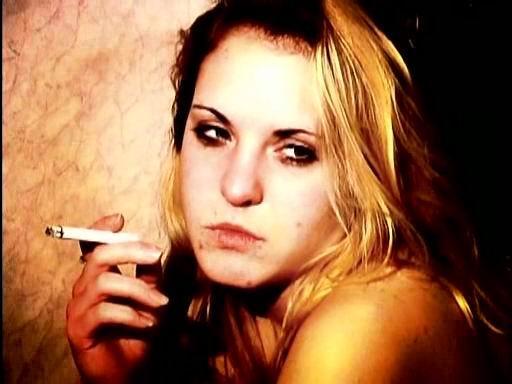 I have a habit of watching films based solely on their title. I can't help myself. The more ridiculously named the movie is, the more I feel the need to watch it.

Needless to say this system doesn't always work out so well.

Oh sure, sometimes you get lucky and find a boneheaded classic like Sharktopus, or enjoy a fun but mediocre film like Zombie Strippers. But more often than not, by the time the ending credits roll, you're just relieved to have survived another 90 minute exercise in incoherent film-making.

So it is with Slaughtered Vomit Dolls.


Directed by Lucifer Valentine (yeah, right) and produced by "Kingdom of Hell Productions," this $100,000 waste of celluloid is the epitome of self-indulgent drivel.

Don't get me wrong. There are images in this movie that will haunt you for a long time. (Like Caitlyn Jenner in a thong long time.) But that's all they are: Images. After 15 minutes of over-the-top avant garde horror I was bored. There is nothing resembling a plot in this movie.

In fact, there is very little resembling a movie in this movie. 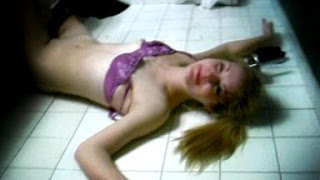 What we end up with are scenes of the drugged out Angela staring into space, putting on too much makeup, and vomiting. There's lots and lots of vomiting. I would venture to say there's more vomit in this movie than in the bushes of any frat house on rush week.
But it's not only the fair Angela's expulsions we are privy to. There are people we don't even KNOW in this movie who seem to show up just to hurl on floors, on each other, and into empty brain cavities. (I kid you not.) Mix in some grainy footage of body parts being hacked off and eyes getting gouged out and voilà! You have the life-changing, cutting-edge world of vomit gore!

Ironically, the film's creepiest moments are seemingly accidental. Watching an emaciated and stoned Lavey pole dance in a strip club, for example, is incredibly eerie. Her glassy eyes and rictus grin are far more sinister than any blood spray left on the director's over eager camera lens.

So the question of course is this: Is Slaughtered Vomit Dolls worthy of your valuable movie watching time? And the answer is, yes and no.

Because it really depends on your point of view. Do you enjoy watching horror movies to be drawn into a story that will scare the Junior Mints right out of you? Or are you strictly a devoted fan of gore with an interest in seeing the most vile films ever made?

If you're a member of the former group the answer is no. But if you fall into the latter, I can tell you there's nothing in my experience that comes close to SVD as far as the amount of gore per frame goes. Even the review above describes just a fraction of how mind-jarringly graphic this thing is. It's like a video bludgeoning.

But like anything else, too much of something, gore included, can cause the mind to go numb. My brain had tuned out most of the horror before the twenty minute mark hit and by that time I was only watching to see if there was going to be a point made. (Spoiler: There wasn't.)

So for the casual horror fan, I say pass. But for the diehard gore hounds out there, it's a must see. As for me? Well, I have a new dilemma. Because even though I was disappointed with this ridiculous movie, the title of its sequel is ReGOREgitated Sacrifice. 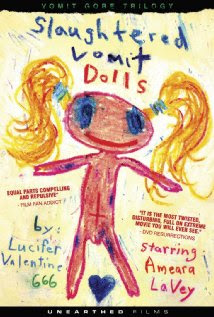