BIG BAD WOLVES...My What Big "Oys" You Have 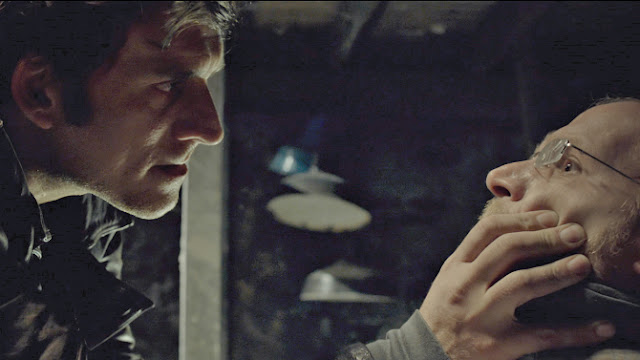 Stop me if you've heard this one.

Guy walks into a dungeon to do some torturing, but just as he's lifting his hammer the phone rings. "I have to take this," he grumbles to his victim.

And there you have the essence of Big Bad Wolves, a quirky movie full of crime and punishment, and a healthy dose of chutzpa.

Don't misunderstand. This film by Aharon Keshales and Navot Papushado is a chillingly realistic portrayal of the murder of a child, undoubtedly the most heinous of crimes and the greatest fear of parents everywhere. It is told with a restraint and respect that is guaranteed to put a lump in the throat of every compassionate adult who watches it. The tragedy is always tragic.

But much like the films of Quentin Tarantino, who famously called this movie "sensational" and the best movie of the year, the darkness in the story appears even darker because of the script's fang-edged humor, not despite it. 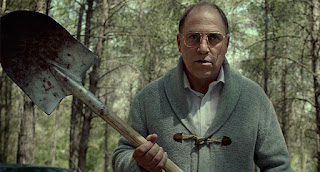 The story begins with the abduction of a young girl, which the directors wisely imply off-screen. The only suspect in the crime is Dror (Rotem Keinan), a man with less testosterone than Jennifer Lawrence. Although the evidence against Mr. Milquetoast is purely circumstantial, rogue cop and pleather lover Micki (Lior Ashkenazi), desperate for information, uses his charm and what appears to be the Israeli Yellow Pages to bash Dror's skull in ask the man where the little girl is. What Micki doesn't know is that he has been caught on video "chatting" with Dror by a pre-teen Julian Assange who downloads the video onto the web faster than you can say, "Micki screwed the pooch and now we have to let our only suspect go."

What follows is the story of three terrible fathers and the impotent frustration their poor parenting has caused in each of them. (And their inability to prevent their shrewish ex-wives from screaming at them over the phone, apparently.)

The film is cleverly written and well acted, and the cinematography conveys a sense of casual evil, especially in the scenes that take place in a makeshift torture chamber (not giving anything away here, believe me).

On the down side, the story contains several coincidences that can only be described as unlikely. And a subplot involving a wandering Arab is fairly extraneous unless it was the film makers intent to make audience members who are trying to quit smoking throw their nicotine patches in disgust.

But all in all, Big Bad Wolves is an excellent genre film with mainstream appeal that forces its audience to ask themselves three very provocative and difficult questions.

What would it be like to lose a child?

How far would I go to avenge the death of a loved one?

Why does my mother insist on calling me when I'm busy shaming and torturing suspected bad guys?