A HORRIBLE WAY TO DIE...My Boyfriend's Back and You're Gonna Be In Treatment 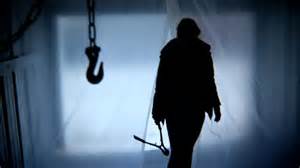 Breakups. They're just the worst, right? You meet someone, invite them to coffee, help them move, tattoo their name on your neck, pay their way through college, and before you know it, you're planning a second date.

But then the trouble starts.

"Where was he till 4 a.m.?" You wonder.
"Whose blood is that on his collar?" You stew.
"Why does he smell like the mailman who's been missing since last Thursday?" You stew and wonder.

Inevitably the reassurances of "I love you," and "You know I only have eyes for you here in my pocket," turn into "I want space," and "It's not you it's me," and "I think I need to kill other people..."

Until once again you're left to pick up the pieces, or at least point them out to the local authorities, and move on. Leaving you to ask the same old question:

"Why are all the good ones always taken into custody?"

Well, if that's your story, then this snappy little independent film, A Horrible Way To Die, is right up your alley. And if not? It's still better than speed dating.

The movie centers around introverted Sarah (Amy Seimetz), an admitted alcoholic trying to get her life together in a new town. Painfully reticent, she nevertheless agrees to discuss her past at an AA meeting. Although she reveals only the vaguest details, her story is enough to move fellow alcoholic and painfully obvious single-person Kevin (Joe Swanberg of 2011's You're Next) to approach her after the session and get all googly eyed and stuff.

Sarah gives off signals to Kevin that she might be interested, but the vibe she sends out also hints at something much worse than just the usual girl cooties. Kevin seems undeterred and asks her out, to which Sarah enthusiastically responds, "Er...uh...okay," or something to that effect. I wasn't sure because the sound in this movie isn't so good. 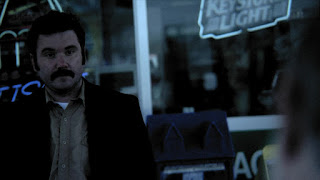 Time passes until one evening Kevin and Sarah either play the most difficult game of Twister ever attempted or perform an act sometimes referred to as "hoochie coochie," or the more commonly known "okay, but don't wake the kids." It's hard to tell because the focus in this movie isn't so good.

Meanwhile, director Adam Wingard must have been surprised to finally read his contract and notice that it called for a horror movie to be made. Enter Garrick (AJ Bowen), a young man with a habit of killing people. It's Garrick who puts the "a horrible" in the "way to die" portions of the movie. On a side note, he's also quite polite. Or at least I think he is. It was hard to tell because the script in this movie isn't so good.

The events that unfold form a collision course that bring all of our main characters together in ways both expected and unexpected. The strength of this otherwise forgettable movie rests in a conclusion that makes perfect sense in retrospect and is not only satisfying but logical. It cleverly reveals the secret motivations of each character and the paths that led them to this final confrontation.

Unfortunately, as mentioned several times above, the technical aspects of this movie are, well...nonexistent. (Aperture? What aperture?) To say it sometimes looks and sounds like it was filmed from inside an aquarium on a cell phone may be an exaggeration, but I bet I could make an argument. And although I have to believe that Wingard was filming this with some sort of effect in mind (after all, his previously mentioned film You're Next showed that he can be much more than just competent) I have to say that unless the desired effect was to irritate the viewer he failed.

A Horrible Way To Die is that rare BSC reviewed movie that I can't justify rating higher than a three-bagger but can still recommend as a film worth your time. Because it was obviously made with very good intentions.

Just not by a very good (this time around) director. 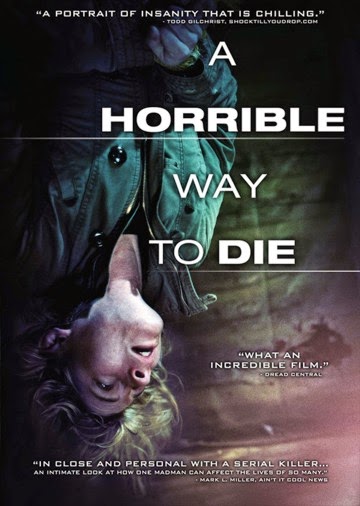 A Horrible Way To Die Trailer
Hacked by Splatter Chatter

Adam Wingard has had an interesting career. His segment of the anthology movie VHS 2, "Phase I Clinical Trials," is pretty bad, "A Horrible Way To Die" is middle-of-the-road good, and "You're Next" is one of my favorite modern horror films. Anyway, this review as originally published was a bit unfair to Mr. Wingard. I never meant to imply he didn't know what he was doing. I meant to say that whatever he was trying to do this time around didn't work for me. Anyway, the review has been tweaked to reflect that. Feel free to agree, disagree, or ask for directions to Laser Quest below.