THE GREASY STRANGLER...Grease Is the Word 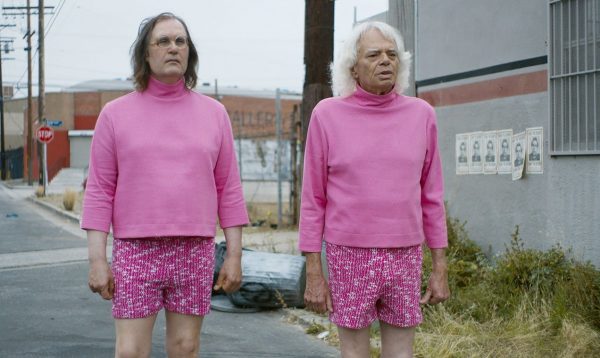 A fried-food craving sociopath (played hilariously by former hair dresser Michael St. Michaels) and his middle-aged son (Sky Escobar) work together on the seedier side of Los Angeles. In order to eek out a living, they charge incredibly stupid people to take a walking tour of decrepit doorways and plastered brick walls that the pair claim are the sites of major events in the history of disco. The long-haired, prune-faced Big Ronnie delivers this made-up history with such a deadpan authority that one can almost overlook the big creepy bulge that protrudes from the crotch of his tight pink pajamas.

There's also a mystery involving the eponymous "Greasy Strangler," a homicidal maniac who slathers himself in grease before terrorizing the neighborhood (the word "mystery" is used very loosely here); a love scene so disgusting you may want to keep a barf-bag and some mouthwash handy; and a car wash. 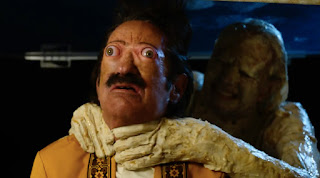 The plot (such as it is) can be predicted before the opening credits are over and the horror is played strictly for laughs. The major complaint to be made is that the absurdity of the movie often feels forced and falls flat. A little editing would have gone a long way. But the humor is more hit than miss and the characters are genuinely fun.

I would suggest The Greasy Strangler be watched with friends. Not because it's even remotely scary but because the discussion Mrs. Chatter and I had while watching this freak show was sometimes more entertaining than the movie itself.

In summary, if you aren't put off by slapstick style horror and are a fan of cult-type movies, this is the film for you.

But just one word of warning:

Once you've seen The Greasy Strangler you can never "un-see" it. 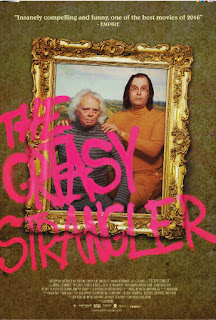