GROTESQUE (GUROTESUKU)... Separating the Men From Their Boys 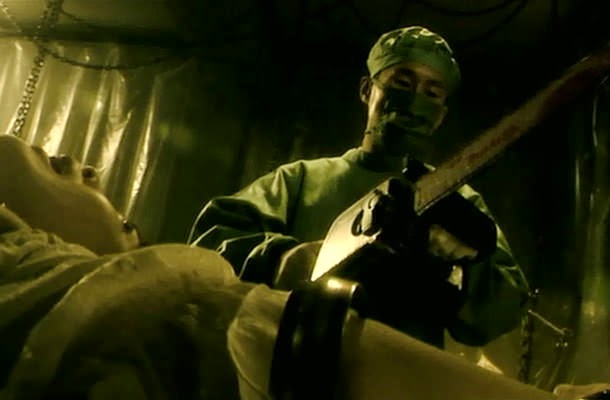 You know how you watch certain films and maybe lose track of the characters? "Wait, I thought she was the one who glued the neighbor's cats together?"

Or the continuity? "Wasn't it just summertime? Where'd that decapitated bobsled team come from?"

Or the plot? "So you're telling me the inbred lunatics running around in plastic sheeting are not trying to torture and kill every human being in town, they just need directions to the Gallagher show?"

Well, have I got good news for you!

Because writer/director Koji Shiraishi's straight-to-the-chase Japanese horror film, Grotesque, has none of those issues. In fact, the entire plot of this movie can be summed up in 2 words:

(That's four words, I know. But take any two out and it still works. Try it.)

The film opens with said masochist slouched in a panel van that is parked in the shadows of a public garage. As a young couple approaches the vehicle, they are attacked, beaten, and dragged into the back.

And six minutes in, Act One is over. 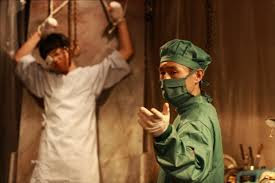 For the next hour, the audience (but not so much the young couple) is "treated" to mental and physical tortures that would make mainstream horrors such as You're Next or The Loved Ones run screaming for their mamas. The violence is so graphic and personal that I can no longer zip up my pants without shaking.

And I'm pretty sure my sphincter is now air tight.

But that is not to say Grotesque is just a tableau of bloody scenes and senseless mayhem. There is a story in the slime. It's minimal, to be sure. But it's there.

This movie is an exploration of what happens when a man has been given too much of everything: too much time, too much power, too much wealth; and how far he will go to make his otherwise numbingly boring existence interesting. Though painted in the broadest of brush strokes, this clearly disturbed man's motivation is poignant. And terrifying.

The most amazing thing about this film is how well it keeps the audience's empathy. After all, there is almost no back story. There is almost no speaking. Why should we care about these characters?

But somehow we do care. We root for the victims to survive. We empathize with the lunacy of the villain. We are transfixed by the savagery, even as we pray for the killer to drop the gore-stained carving knife and hug it out with his captives.

Which is what makes the movie's finale all the more devastating.

Grotesque is not high art. Nor is it for all horror fans. But it is jarring. And realistic. And scary.

Unlike most horror movies which create plot by asking the question "Why?" Grotesque raises the stakes by giving the answer:

And that's the scariest thing of all.


Special thanks to reader Tracy Olden for the gentle push needed to finish this review. 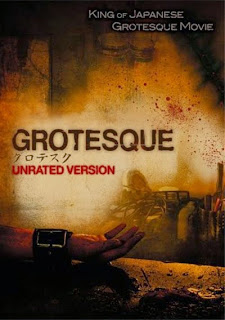 THERE'S A MONKEY IN YOUR WINE RACK said...

What a perfectly accurate depiction of this vile, senseless and unable to turn away film. Wicked!