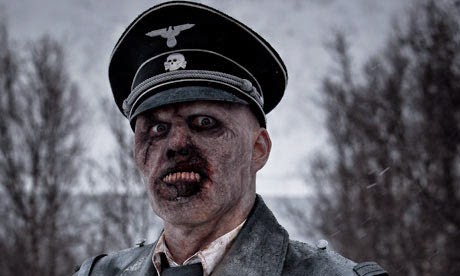 They're ice cold, they're terrifying, and they murder you so fast you won't even know what hit you.

What could be more horrific than zipping a hundred miles an hour down a steep mountain pass made of packed snow surrounded by trees and razor sharp pine needles while balancing on two wooden slats and holding long pointy poles? (For the novice skier, these poles are used to stab oneself to death should the pain of fracturing every bone in one's body become unbearable.) Maybe running into a dozen undead Nazis who want to bayonet your face into a sauerbraten would be a little scarier, but not much.

You can judge for yourself by watching writer/director Tommy Wirkola's fun horror comedy Dead Snow, a little Norwegian film that does for ski vacations what Friday the 13th did for summer camps.

The film begins with a young woman (stop me if you've heard this before) being chased through the woods. Set to Edvard Grieg's In the Hall of the Mountain King, the scene is silly and surreal and effectively sets the tone for this quirky movie.

This gang of unnecessary risk takers plans to meet up at a remote mountainside cabin with an eighth member of the circle where they hope to enjoy soft drinks and not have premarital sex, (wink wink). Unfortunately, when they arrive at their destination their friend is nowhere to be found. But have no fear! It turns out she is often late because of her habit of traveling alone. At night. Through the woods. 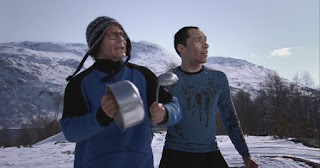 Tensions are raised when the horror movie standby "old codger who shows up out of nowhere to give back-story information and then die" stops over. After plopping himself down on their ratty couch and insulting their organic coffee, he cracks open one of their beers without asking and tells them the story of an evil band of Nazis who captured the town during the war, tortured and killed all its inhabitants, and were so nasty everyone called them Ms. Jackson. Now undead, this zombie Gestapo stalks the woods searching for unsuspecting snowboarders and the occasional Hogan's Heroes rerun.

Once his purpose in the movie is fulfilled, "Grandpa Exposition" then hurries back out into the darkness and promptly gets himself killed. (Didn't see that coming.) Meanwhile, our band of merry idiots writes him off as a poorly dressed paranoid alcoholic and resumes their merry idiocy.

Which is when the movie suddenly becomes the most graphically violent Scooby Doo episode ever filmed.

The meddling kids discover something hidden in the cabin. The aforementioned Nazi zombies come back to reclaim that something. People run. Zombies chase.

So yeah, Dead Snow is clearly not original. It follows a tried and true template from which it rarely deviates. It is full of horror movie cliches. And it is predictable from start to finish.

But gosh darn if this movie isn't fun.

The characters are likeable. The dialogue is genuine and funny (even in subtitles). The graphic kills are interesting if not unique. And the ending is satisfying.

Dead Snow is the type of film that stocks horror conventions with actors and horror buffs with trivia yet leaves the horror movie landscape unchanged. But sometimes all the viewer wants is a movie that doesn't require any activity from their tired brains as they watch goofy characters die in gruesome ways. For those times, Dead Snow is a winner.

So if you are the type of genre fan who enjoys well made, well intentioned, middle of the road fright films, this one should be at the top of your list.

And to those outdoor enthusiasts who'll be watching it while passing four to six weeks nursing multiple compound fractures and lacerations to the head, I have one more thing to say.

You should have used the poles. 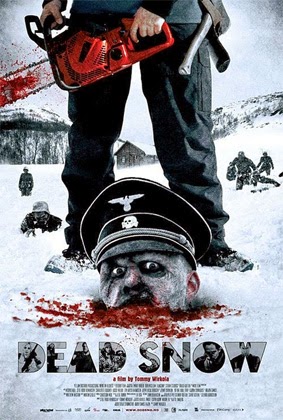 Helsinki? Really? Dude, You've got your maps all mixed up.